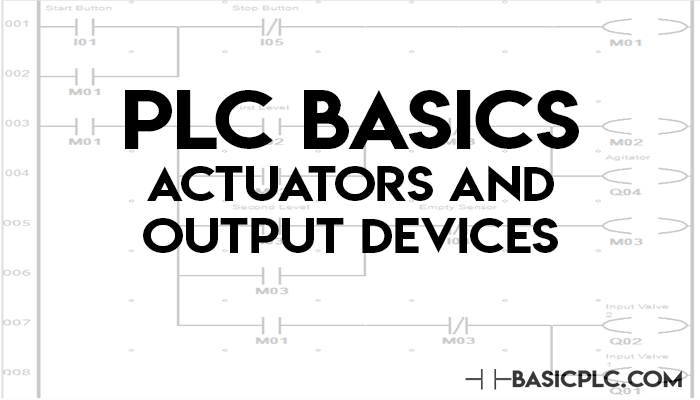 Now that we know PLC Basics and some PLC input devices, we now go into the interface between the controller and the real world: output devices.

In PLC programming, they are the devices that are activated using conditional statements that the input devices form.

Output devices are operated by the PLC using the DC voltage at the output. A number of devices can be controlled by the PLC, but we can categorize them to indicators/alarms and actuators.

The indicators/alarms include devices that can represent a predetermined state in a basic PLC control system.

Indicators such as pilot lights—usually a green one, may represent that the PLC system is running properly. A red pilot light usually represents a PLC system that does not have ongoing operation.

Alarms provide notification with higher urgency. A blinking red light, a horn, or a buzzer may represent that a hazardous condition has been met in the system.

These are just the most common applications of indicators and alarms.

They are usually placed in the control system to tell the operator, for example, “Hey, you have a DC voltage output at the solenoid valve right now”

or “Hey, something is wrong because your temperature level inside the system is too low or too high”. 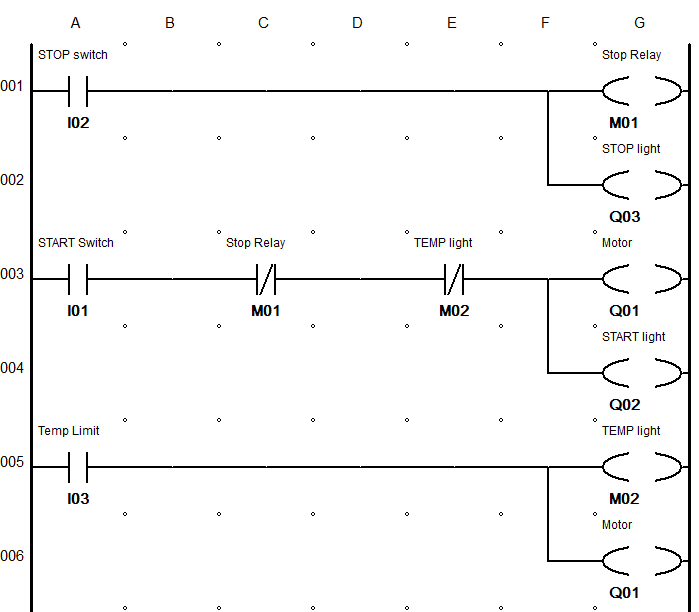 Notice that I put 3 indicator lights. The START light will only power when the START button is pressed, as it should be. The STOP light will only be turned on when the motor is not running, so by default, this should immediately be turned ON if we just supply power to the PLC.

The third pilot light that I put is a special case for the PLC control system—the pilot light was placed such that the temperature limit switch will turn it on.

Because of the third pilot light, the operator will know whether the PLC control system was turned OFF by another operator, or it was the high temperature that turned the motor OFF.

Of course, there are limitless applications of these pilot lights in PLC automation or PLC control systems because they are just plain handy.

However, you would not want everything in your system to be indicated by pilot lights, as they occupy an output terminal at the PLC output side. The most important elements of the design must be considered first, namely, the input and output devices.

Buzzers are devices that produce sound with usually a single frequency when powered by an electrical source. They are more appropriate to be used as alarms rather than indicators for obvious reasons. Nobody wants a buzzer being turned on for 24 hours a day because the START button was pressed.

Buzzers can be creatively used in PLC control systems by varying the ON/OFF intervals or the ON duration.

As an analogy, in primitive telephone circuits (the rotary ones), they send out electrical signals with the same level of voltage BUT they vary in duration to represent a single digit of the dialed telephone number.

Applying the same concept to buzzers, you can definitely use differing intervals to indicate different trouble signals. For example, if for some reason the output valve of a liquid tank did not open properly and thus caused the “overflow” level sensor to turn on, a buzzer may turn on for 500ms and off for 500ms. For a less urgent situation, let’s say the level of the tank nears “empty” level, the buzzer may just turn on for 1500ms and that’s it.

What’s the advantage? Using buzzers allow us to convey different signals or messages to operators using just a single output device. Does this mean that the pilot lights are less disadvantageous in terms of notification?

Not necessarily, because pilot lights can allow you to instantly monitor the STATUS of a PLC control system, while buzzers are used to notify at a certain LIMIT of a physical parameter of the PLC control system. They certainly have their own place.

Actuators, on the other hand, convert an electrical signal (control signal) to mechanical movement.

Simply put, actuators translate the output signal into practical operations. They are usually connected to high-power sources, but they do have coils to allow DC voltage to control the switching.

In some cases, electrical devices—even the most powerful ones, are just not fit to perform a specific task over and over again. For applications like frequent heavy pressing, molding or lifting, hydraulic or pneumatic systems are much more suited for the task.

But ever since our logic controllers made their way to our industry, they make the use of hydraulic and pneumatic systems MUCH EASIER than before. The combination of these systems made a cost-effective solution for large-scale projects and/or assembly lines.

The solenoid consists of a fixed part: the coil and the frame, and a dynamic part: the plunger/armature as shown in the photo below. 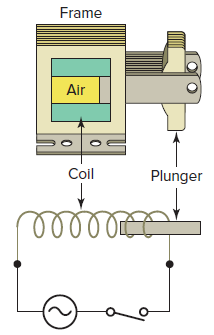 When the DC voltage of the PLC closes the switch of the solenoid (which connects it to the other power source), the current passes through the coil—which creates a strong magnetic field. The magnetic field pulls the plunger into the frame.

When the electrical current is removed from the solenoid circuit, the plunger goes back to its original position (usually they have springs).

Usually, solenoids are used to control the flow directions of fluids in pneumatic and hydraulic systems.

Motors are devices that convert electrical energy into mechanical energy using magnetic fields. They consist of a multitude of coils mounted on their frames, but the way they are connected varies depending on the type of motor.

The DC motor’s construction has two major components: the armature windings and the field windings.

In basic PLC Automation, DC motors are controlled by a technique called Pulse Width Modulation (PWM). This is a modulation technique used in Digital Communications, but it also found its way in controlling DC devices such as DC motors and Lamps.

Essentially, the PLC can control the speed of the motor by controlling the duration of the DC pulse applied to the DC motor, called duty cycle. This is EXACTLY the same concept as the rotary telephone analogy discussed previously, but instead of signaling, this is used for power control.

Of course, there are also other types of DC motors that may be used in PLC automation or control systems. One of them is the Brushless DC motor.

The brushless DC motor uses permanent magnets instead of the current in the field windings to create a magnetic field.

However, it is the permanent magnet that rotates within the coil, not the other way around like in regular DC motors.

The advantage of using brushless DC motor is—well, it does not have a brush (you now have one less wear problem to worry about).

In terms of control, the direction of rotation of the brushless DC motor is just easier to control than with regular DC motors.

Stepper motors, unlike regular DC and AC motors, cannot rotate continuously when a voltage is applied to their input terminals. The rotation can only be done through activating its coils in the correct sequence.

The stepper motor is designed such that the motor rotates through equal angles, called resolution. Each increment is called a step (hence, stepper motor). For example, if one input pulse made the motor rotate 90 degrees, 4 pulses will make it rotate 360 degrees. If one input pulse produces 0.5 degrees of rotation, then you would need 720 pulses to complete one rotation. You get the idea.

From what I have read, steppers motors are ideal to use in computer printers (even 3D printers) because of the precise steps of the motors that translates to an accurate linear position.

An output device does two things in the control system: It can notify the operators about a state in the system in relation to the program uploaded to the PLC, or it can perform tasks for the user upon instruction and/or automation. It only requires that the devices be electrically controlled to become capable of being controlled by the PLC.

The previously stated devices are not the only output devices out there, obviously. There are tons of newly designed output devices that perform tasks that are more and more specific. What matters is that you choose the right output device for the design that you are working with.

Thank you for reading!

Hi, We’re BASIC PLC, the owners of this website.

We created this website with the goal of helping YOU learn about the basics of the Programmable Logic Controller.

PLC Programming 101: Everything You Need to Know

Introduction to PLC: PLC for Dummies

What are the different types of PLC?