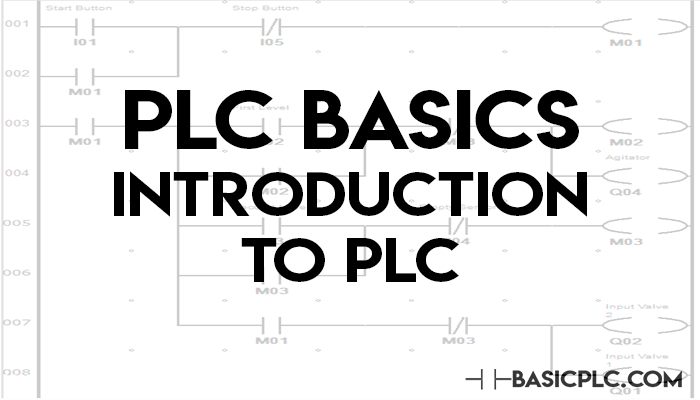 A commonly asked question of people who are new in the control engineering world is just that–“What is the difference between PLC and SCADA?”

The difference between them is that the PLC is hardware based and SCADA is software based. While both fall under the category of “control systems”, SCADA provides greater capability than the PLC with the help of several components.

Optimally, you would want to use the capabilities of both types of control systems in order to meet design expectations while becoming more cost-efficient (in the long run).

SCADA stands for Supervisory Control And Data Acquisition. It is a technology that enables the user to collect historical information from multiple facilities (even distant ones) and even supervise the control operations.

Of course, the historical information acquired from the whole data gathering system (usually from sensors and outcomes) are visualized by the user in order to perform a control decision on his discretion.

Usually, these data are analyzed statistically in order to optimize processes and/or systems. An example would be profit optimization for a production line.

Lately, SCADA systems have used the concept of Machine Learning or even Deep Learning to process data and automatically perform control decisions for the system.

The Learning system can act as a “brain” that can be taught about desirable or undesirable outcomes for a system based on VERY specific conditions of inputs and other parameters. It’s like the “most raw (hence, inferior)  version” of Artificial Intelligence. 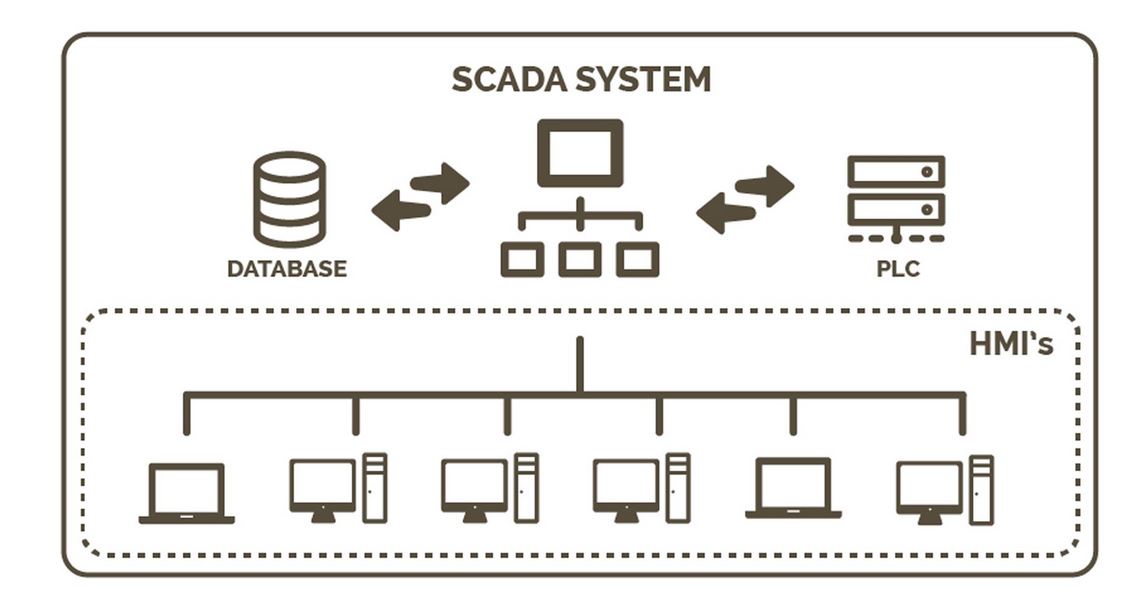 The operator has access to a visualization unit, usually called VDU or Video Display Unit in order to show real-time data regarding the conditions in the monitored facilities of the whole SCADA control system. These are provided to the operator via a Server computer (the “sink” of all data).

PLC systems, at large, operate independently even without the help of computers because the controller IS a computer itself. This makes a large difference between a PLC control system and a SCADA control system as SCADA systems cannot work using just the central component alone (of course, the statement assumes that there are input and output devices present). More on that later.

The Server computer is connected to different distant control units called RTU or Remote Terminal Unit. Usually, the server computer connects to these RTUs through a transmission media.

These RTUs are the ones connected to the physical facilities of a process inside a SCADA system. The RTU pre-processes the data before sending it to the Server via transmission media.

Going back to my previous point, the PLC does not require any other interface for the input and output devices to become part of the system. SCADA systems require Remote Terminal Units to do so.

Then, what is the difference between the PLC and the RTU?

Good point. Both certainly have overlaps but in terms of how they can be controlled, as well as what tasks they were designed to do, they become much more different than you think.

RTUs are usually designed for remote communications between the server and itself. It is most commonly a pre-processor of the data that it receives from the connected devices, as well as a device to relay the command messages that come from the Server.

PLCs, on the other hand, are designed to actually control the devices in its immediate surroundings based on the PLC programming.

The PLC does not rely on any other condition other than the signals that come from the connected input devices.

However, the PLC does not concern itself of recording or relaying the data regarding the processes involved.

Hence, the RTUs are more inclined towards a manually operated type of control. In spite of being reliant on commands, RTUs have the advantage of being controlled REMOTELY as well as intelligently through careful decisions that are based on DATA.

On the other end of the spectrum, PLCs are more inclined towards an automated type of control. They only rely on the instantaneous conditions of the input devices connected but are more capable of controlling output devices without much supervision.

In this context, transmission media refers to a dedicated communication medium between two Terminal Units–the Main Terminal Unit (Server) and the RTU.

Fiber-optic cables are usually used for SCADA systems, while some use regular Digital Subscriber Lines (DSL) to interconnect the RTUs to the main server computer. Radio technology is also used. Hence, almost every communication technology available can technically be utilized for SCADA systems.

It is worth noting that the digital information can not be directly sent from one computer to another without modifying the signals in such a way that it would be able to propagate through the air/cables with minimal error and highest fidelity.

Using these communication devices, SCADA systems are easily connected as a Local Area Network. What this means is you can easily control the processes in a SCADA system without you being physically present in the actual facility. You just need to send out control commands using the Server computer and you’re done.

Even though we wanted to differentiate the two systems in this post, some people may also ask if PLC and SCADA systems could work together.

PLC systems can work UNDER a SCADA system. With proper communication interfaces, usually Ethernet, you can definitely make a PLC control system work under a SCADA system.

Where is SCADA used?

However, when it comes to safety systems and product measurement systems, the convenience of SCADA may not be reliable.

These power plants have plenty of small hydroelectric generators which are grouped together. Based on the power demands, they are turned ON or OFF.

Obviously, it would be very difficult to do this switching using manual labor, so instead, SCADA systems are used. That way, it would be easier to visualize which group of generators are ON, and which are OFF.

In addition, the total generated power may also be monitored in real-time as well as the total consumed or demanded power by the customers. This allows the operator to provide control decisions that cater the demands of the customers while being cost-efficient and timely.

Pipelines for fluids or gases

Pipelines can be controlled by opening or closing valves from the different pumps that are connected to them. Because pipelines span a lot of distance, they are a perfect application of a remote control type of system.

The thing here is that the leaks are dangerous to the environment (usually) hence the control system must be able to immediately inform authorized personnel about the problem. SCADA systems allow pipelines to be scanned for trouble, as well as control very distant valves in an instant. This way, leaks are easily mitigated.

In transmission lines that propagate power to the country, it is obvious that the entire system will cover thousands and thousands of miles.

Luckily, power is simply controlled by opening and closing switches that allow the production line to meet the demands of the consumers. Similar to the hydroelectric generator example, power transmission also benefits from SCADA by allowing remote control of the switches through GREAT distances.

Telecommunications is where a LOT of data is present. Hence, SCADA systems allow data logging and monitoring (real-time) through a central computer.

Moreover, control of the different radio devices that allow propagation of intelligible signals through modulation is also possible through remote control in a SCADA system.

Using SCADA, even a Wide Area Network that could span an entire state or country may be conveniently monitored and controlled.

Irrigation systems, too, cover a very large section of a country. It is impossible to manually control each station every time, though.

Similar to the generator application, water systems consist of valves rather than switches that allow them to increase the delivered amount of water based on the demands of the customer.

Using SCADA systems, you can monitor both the consumer’s demands as well as your production rate and certainly you can issue a command that will meet them halfway.

When SCADA is NOT used

As said earlier, despite SCADA being a robust type of remote control and monitoring system, it should be taken into consideration that IDEAL conditions do NOT exist. Hence, because the SCADA is a REMOTE type of system, it must not be relied on for critical applications.

For example, if a stream of data does not reach the server, it may seem like a small nuance. But perhaps it might be one that could potentially cause a company to lose millions of dollars. Here is the ONE application where you should NOT use SCADA.

In Safety Instrumented Systems, it is common notion that the instrumented system must be designed to follow 3 main characteristics, which are:

Being a control system itself, SCADA still allows you to override the normal control of the whole system because the commands will follow the supervision of the operator.

Now, this is where the problem comes into play. SCADA does have a lot of common components between the normal control system and a supposed safety instrumented system.

Now, the only solution to this is to add components (an RTU) that would provide independence between the components of the safety and normal control system.

BUT, adding components violates this rule! A safety system must be designed with the simplest form possible. The minimum number of parts or steps are usually the target.

In remote systems like SCADA, however, this is already violated as there are already a number of instructions and components that the process must undergo before it is able to be executed.

Why PLC is better for Safety Instrumented Systems

With all that being said, SCADA may still be used to improve the safety of a system, with the exception that the actual safety instrumentation is done AT A LOCAL LEVEL using a different system.

PLC is best suited for this case because it is not only MORE suitable as a rugged computer that can handle strenuous conditions, but it also relies on just a handful of components to do the job.

Related: Why PLC is used over Microcontrollers

In addition, communication between the PLC and the devices are DIRECT and does not require supervision.

Summing it up: Difference between PLC and SCADA

To sum up this post, the difference between the PLC and SCADA is as follows. SCADA is a system that relies on computers, software and communication media to remotely monitor and control devices in a control system, usually large-scale. SCADA systems are usually data- and decision-driven control systems. PLC control systems rely on hardware and immediate connections to effectively manage output devices in an instant when an input device changes state. PLC systems, on the other hand, are driven by instantaneous changes.

Hi, We’re BASIC PLC, the owners of this website.

We created this website with the goal of helping YOU learn about the basics of the Programmable Logic Controller.

PLC Programming 101: Everything You Need to Know

Introduction to PLC: PLC for Dummies

What are the different types of PLC?